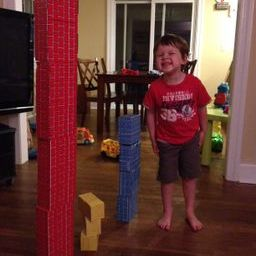 My children are showing signs of potential and I couldn’t be more concerned. It’s a wonderful thing, ability, but let it out from under wraps too early and it can be awfully counterproductive.

My firstborn is not even three and a half and he is pretty consistently told about his brilliance. This isn’t unusual, most people spend their time praising children for rather standard accomplishments. In the case of parents this is natural. Every new thing your child does is earth shaking. Truly. But it’s becoming evident in school that he is getting some distance between himself and the other kids. He has a memory that is remarkable, a vocabulary that is of someone twice his age and in a class where many of the other kids struggle recognizing their own names he not only recognizes and spells his own name, he recognizes and spells everyone’s name. And when he is confronted with new words he can often sound them out since he’s known the sound of each letter and what letter comes after what since he was two and a half. He reads me bedtime stories.

I should start by saying that I’m aware this isn’t some kind of Doogie Howser, MD level of brilliance or anything. He’s a bit advanced, that’s all. But he hears it all the time. He’s also started to hear and notice disappointment in teachers when he misbehaves or struggles to focus. It happens so rarely that it must be noted as it is entirely out of character. But to have simple struggles like these, standard ones really, highlighted at every opportunity is something that his burgeoning emotional development is starting to register. He’s already a kid capable of harsh self-criticism as noted in an earlier piece, Fear and Loathing in Parenthood, about his struggle with potty training.

Furthermore he is stunningly good looking. I’m not going to explain this one away. I may be biased, but that don’t mean I’m wrong. And on top of that, he’s about the average height of a six year old. When he’s around other three year old kids, as he is all day everyday, the combination of his precocious ability and his mature behavior, combined with his stature and handsomeness make grown ups think he is older and more capable then he is. If he’s struggling there’s a reason. He’s three that’s the reason. But lately, I’m starting to feel like that reason is pressure. Pressure to live up to something that others think of him. Again he’s three.

What makes me crazy is how wrong people get the whole ‘gifted and talented’ thing. I want to foster his curiosity and I worry that it can be stifled if he isn’t able to continue to see the joy in learning if he drifts further from the mean and finds less and less that challenges him moving forward. But this is often where people start talking about ‘tracking’ kids. Getting them into a lane that will challenge them intellectually in order to keep them engaged. It’s important. But don’t for a second think this is the most important thing.

Prior to moving out to New Jersey my wife and I lived in Astoria, Queens. It was our first apartment and the neighborhood will always hold a special meaning to us. While she was pregnant with Charlie it became clear to us that we would have to move. She was working in Parsippany, NJ and we lived in a fourth floor walk up without a dishwasher or a washer and dryer. It became very clear that we could double our space and amenities and get what we needed to be comfortable by moving. So once the spot was picked and the date was set we went about planning. This is something we do now on the fly. Life is crazy with kids. But back then it was something we could plan a dinner for. So we went out to a Greek restaurant on Broadway and 30th, sat on the street and talked about our future.

We hashed out logistics. We did calculations and determined that we could get movers!!! (ALWAYS GET MOVERS) We decided our move day and talked about the various possibilities for daycare. We even daydreamed about our new apartment and planned projects that we had no idea that we’d have no time for after a kid.

Then Karen started talking about the need for us to get our kid into a good school district. I have biases against the education system, biases that have altered in detail but remain present and I dismissed the concern. We weren’t buying at that point. We were getting a two bedroom in Morristown. Who’s to say we’d even be there when the kid started school. Besides, I had a close friend and coworker who grew up there and went to the public schools where we were moving who is one of the brightest and most energetic and engaged people you could know, we should stay zenned out and not worry.

This was and is my way of avoiding many things I don’t wish to confront. But she pressed as she should and eventually got me to access and express my true feelings on the matter.

The first part of my feelings are cynical. I don’t think school matters, and it matters less and less the further you go. The people I’ve known, at least the non-scientists and non-social workers who have gone to ‘the right schools’ are living a life I don’t want for me or my kids. They place value in the wrong proportion. There’s no denying the value of money, but there is greatly overstating it and many of these people in my experience do that. Which pulls these efficient minds further and further away from curiosity and pushes them to cold profit analysis. It’s gross and I don’t want my kid surrounded by these people.

The second part was more optimistic. I told her that the kid, assuming standard developmental health, would be bright. We didn’t have to worry about that. We were both smart. The IQ and capacity would take care of itself. What we had to do, what our responsibliity would be was to foster natural curiosity and be mindful in nurturing his emotional development. It’s our job to make sure he is a compassionate and caring person who is respectful of others and appreciative of all that he will be afforded.

While we may have disagreed on the value of an education, my wife could not have been more in agreement with me. It is our job to raise a person in whole and value the right things. Everyone gets to decide what is right for them. For us it was fostering curiosity and compassion and kindness and enthusiasm and love and a sense of appreciation.

I think that in general we’ve lived up to this. It might be hard to see as he is at an age where his curiosity puts him in a lot of situations that could cause an ambulance ride and as a result I’m more often then I’d like employing my scary dad voice. But we are very proud of the little boy he is. He shares, is kind and is loving and joyful. And at this age that is all that counts.

The problem with potential is that it narrows your outcomes and heightens expectation. So if you show early signs that you might be incredible, you are then tracked to be so. And that’s crazy, you’re a kid and no amount of giftedness, other than effort and curiosity should be highlighted. Your interests may turn out to be in a direction that isn’t yet present. Why stifle these.

I have a visceral reaction to this, one that is personal. Emotional immaturity causes you to internalize the disappointment of others. I have a good deal of experience in this area. And in my case, I reacted to this by failing immediately. I’d pre-fail to get it over with. High School would have been easy for me had I tried. But I didn’t. The same is true with college. And I claimed not to care. I swore up and down that I didn’t care what anyone else thought. I didn’t care so much in fact that I drank to blackout every night and gained 80 lbs. immediately on going away to college. Where I immediately failed off the basketball team and never had a gpa above 2.1 in the ten years it took me to get a degree. I made a point and a show of not caring. To this day I still am able to get access through my first impression and to this day, to some degree, I still set out to lower expectations immediately when I sense that there are high hopes.

I labeled myself a failure and went about making myself one. I didn’t care, and it nearly killed me how disappointed I was in myself. It is for another post, but the seeds of my salvation from this awful cycle of self-defeat was when I went to work at a summer camp for adults with special needs. The result of which was finally confronting my issues and embarking on years of struggle with myself and the eventual ability to find and be loved by Karen. She was the payoff, and as such the WHOLE struggle was worth it.

I hope beyond hope that I can avoid a similar fate for my Charlie. I’m frankly terrified that he won’t regress to the mean of toddlers in his world and that the expectations will come at him fast and furious. I am afraid that he’ll start having his potential squashed by the good intentions of those trying to support him. I fear this will make it nearly impossible for him to know what it means for him to be fine. Which is exactly what he is. Absolutely, joyously and beautifully fine.

11 thoughts on “The Problem with Potential”