The home I grew up in, the one I’ll only see in pictures and inhabit only behind my closed eyes ever again, was one that had life oozing, sometimes tumbling, out of every corner and on every wall. Hell, the walls themselves can never fully mean to someone else what they meant to us. You see, my father is an artist and he designed our home. He’ll hasten to point out that he’s a designer, and he’d of course be right. But art is in the eye of the beholder. In fact I’d use a version of his own argument against him if he ever were to push back too hard. Not that he would, I suspect. He’s always been a dad that’s happy to allow us to be wrong and to learn in our own time. As we’ve gotten older and wiser the times that time has proven us right have increased and on this one I’m right. Just like he was when someone would say that Norman Rockwell was not an artist, but rather an illustrator. Besides, my dad’s art, much of it from his ‘art school’ days, some from the days when they were a young couple trying to decorate a home, hung all over those walls he designed.
Now ‘illustrator’, at least as far as I can tell, holds no innately pejorative meaning. It’s not an insult to call someone who illustrate’s an illustrator. But in the particular case of an artist of Mr. Rockwell’s talent and the way in which his work was received by so many contemporaries and more recently by so many subsequently, there is no mistaking the pejorative if not downright disdainful way the term ‘Illustrator’ is spit out in regard to this man’s considerable work. Now I paraphrase here, and my dad is not one given to high emotion, but I’m quite certain that my father would find this assessment to be straight up baloney. Or Bologna, if you prefer. It rankled him. His art was no less artful for being purchased. Was in fact far more technically impressive, emotive and often breathtaking than the celebrated works of his contemporaries who looked to shock or amuse rather than paint and convey. I believe these things. I did even at my most harshly judgmental, Brooklyn bohemian, cravenly desirous of the approval of the cool people that I ever was. Because my dad was right.

We went out of the way for a day on a family vacation when we were kids to spend a night in Stockbridge so we could visit the Rockwell museum and the work is extraordinary. I assume we stayed near Stockbridge. Even then it was ridiculously expensive and we were a family of 6-9 kids, depending on when you caught us. I mean, I have 2 and we’re challenged to make a day at the beach. But my dad, he was going to see the Rockwell Museum, and we were going to as well. 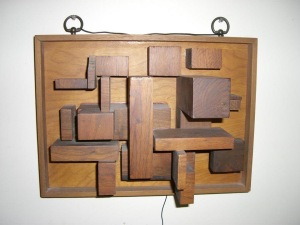 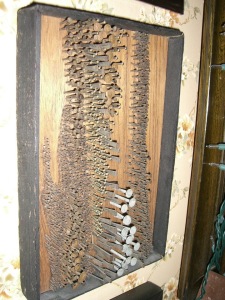 The art that hung on our walls, it was and is beautiful. It was original and creative and something I’ll have a sense memory of until the day I die.There were pieces made of crepe paper and lacquer, some evoking scenes from nature others crinkled and crumpled and exploding from the the frame out to you. As a kid, even now I’m sure, I’d be hard pressed to resist feeling them, running my hands over the points and crevices, riding the ridges of the bright orange that has never seemed to fade with time. Or the hard wood drawn on with varying sized nails hammered in that should seem hard and unforgiving but convey soft fluidity as the lines denote structure and movement from top to bottom. The figure could be wind, it could be human, it could be a spirit. I could look forever and for me it would never fully be decided. Or the dark stained blocks, differnt shapes and sizes, but all right angles, creating a skyline if laid flat, and a sense of looking down on a city as they hung in their frame on the wall.

Art wasn’t just something he did. He breathed art. There was something of it in the very life he’d crafted. He is 6’3″ and as a young man, for at least the first 15 or 16 years of my life he had a big, bushy black beard. He looked, as EVERYONE noted, like a living, breathing Abraham Lincoln. He and his beautiful, loving wife had 6 kids. They didn’t always have enough to make it all work, but somehow they did. Didn’t matter, even if they couldn’t, there was always room for one more at the table. Anyone who knew us, even just a little, they always knew that about them. Many would ascribe it to my mother, a truly charitable and loving soul, but they were a team. The decisions they made were based on what served the greater good, what completed their vision of what a beautiful life looked like. For my father that picture was one that couldn’t avoid including art and curiosity, and daydreaming and all that it had given his life. He was a designer, true, but he was an artist not only of multiple media’s when that term meant something altogether different.

Art was a living and breathing thing in our home. I don’t know that this part is true, but I even think that my dad’s parents met somehow through community theater. This may be a fanciful fiction, but it’s got some truth in it, even if it isn’t fully ‘correct.’ Music, books, theater, these were all an integral part of life growing up in the Medler home. I wasn’t quite brave enough to try to participate in the creation of said art like my older brothers were when I was a kid, but I sure am happy I was exposed to it. I became a big reader and lover of novels. It was what spoke to me. They were performers. I envied them. I’m glad I’ve found and stuck to writing. I’m glad to be a part of this part of the family legacy in some small way, even if it doesn’t exactly mesh with the rest.

My father also communicated with me through art. When I was not much older than ten, maybe twelve, we found ourselves home alone for an evening. Honestly, I’m the third child in a family of six, or sixth of nine if you choose to define our family in the most inclusive way, as we all do, and this might be the only time when we found ourselves in this predicament. My younger sisters were at friends houses, my youngest brother may have been traveling with my mom, or maybe he was not even born yet, I’m not sure. In any case, I distinctly remember my father mentioning that he’d heard an interview earlier in the day and that Pete Seeger and Arlo Guthrie were playing at Finger Lakes that night. He really wished he could have gone.

‘Why don’t we go?’ I said. I knew Arlo Guthrie was the guy who did the Alice’s Restaurant song. I liked that.

‘Yeah.’ I said. I was really excited. Things like this had yet to start happening for me.

That night we just drove out there and stayed for the whole thing. It was great. My first concert. Pete Seeger and Arlo Guthrie with my dad. A night to remember indeed. He even played Alice’s Restaurant and his shtick was pretty amusing. I had no idea how much of an inspiration Pete Seeger would become as I grew up. He seemed super old then and I don’t think he’d even STARTED cleaning the Hudson yet, though I’m certain I’m way off. I didn’t know he had, anyway.

Another time he rented Breaking Away from Wegman’s on a Friday night and said, you should watch this. It’s important. He would later rent Brazil and say I should check it out. Wasn’t of any use though as neither of us could make any sense of it.

In our home, filled with art, there was a piece of furniture that no longer seems to hold the place of importance it once did as a family focal point. Our Stereo. It was six feet long, two and a half feet tall and big. Speakers covered in earth tone fabric occupied either end in full and in the middle was a door that rolled open. Behind it were the records that were important enough to keep out, to listen to. Eventually we’d overrun his truly beautiful collection with Disco Duck and K-Tel Collections, but early on, it was magical. All the first editions of the Beatles. Beach Boys. Ray Charles. My father’s favorite band, The Lovin’ Spoonful. I remember dancing in underoos to Summer in the City. Loving the Beatles before knowing it was a band anyone other than us knew. I remember my seventh birthday and my cool cousin buying me ‘Off the Wall’ after seeing how much I loved every time ‘Don’t Stop Til You Get Enough’ came on and having something that could stay in the Stereo. It felt so SO grown up. I had taste, I had arrived, I had something adult enough to have to stay in the stereo when the doors rolled closed. Now my music, my history in songs largely stays in my pocket, on my phone. I’m sure it will seep out and as they get older more and more music will return to the air. But it’ll never hold the mystique and the mystery and the excitement that the stereo in the shape of an upright freezer in the dining room held.

My father has given me more than I could ever possibly recall. He gave me life, after all. As a father now I realize that even more than that, he gave us, all of us, his life. Freely and fully and happily. I’m endlessly thankful for it. But beyond that, beyond the sacrifice and the work and the love he also gave me art, and I can’t thank him enough for that.

7 thoughts on “My Father Gave Me Love and Art”