When I was eleven years old life was pretty damn great. I was finally able to play on the CYO team where I was the star everyone saw coming. I was finally allowed to leave the school where I was punched more than I’d have preferred and was instantly popular in my new school, where I wouldn’t catch a punch for a good five years. Girls, girls I was starting to notice almost all noticed me! Of course one or two didn’t, which was also great because that allowed me to talk about them for hours on end with my best friend Cory while we shot hoops, rode bikes, got into trouble and hung out everyday. I remember it like it was yesterday. The map of the streets, and all the little curbs you could catch air off of, and all the paths through woods, the towpath along the canal that could take you uptown to the theater that played matinee’s of Back to the Future that I’d bring myself to after earning money mowing the lawn. The locks that everyone else jumped off but I was too mature (scared) to and the trail into the woods where parents didn’t venture and where we taught ourselves to smoke cigarettes. If there was nothing to do for some reason I had a basketball court across the street that was essentially mine for years where everyone came to play. Hoops on either end but we only ever used the one side, the one with the net that came off, then the chain that went in its place only to become half destroyed and half tangled so you couldn’t get that satisfying sound of the chain swish when the ball made it through. It’s all engraved in my brain. It was 30 years ago. And it feels like I’m still there.

30 years from now I’ll be in my 70’s. I fully intend to be vibrant and present and years away from my final farewell. But still, your 70’s is your 70’s. My great accomplishments will have been achieved, whatever they might be. And don’t kid yourselves. Anyone that makes it to their 70’s has had their fair share of great accomplishments. They’ve had a fair share of everything, actually. They’ve had love and loss. They’ve had wins and losses. They’ve had boundless optimism and crushing defeats. They’ve had magic. They’ve had insurmountable challenges that they prayed to be saved from only to find out how capable, how able, how great they actually could be. They’ve learned that most of the tragedies are actually just turning points. They’ve survived what they thought would kill them. Maybe physically, maybe spiritually maybe just situationally, which often feels the worst but leaves the least scarring. They’ve bought and sold and bought. They’ve seen cruelty. They’ve been moved to tears by beauty and by rage and by love and compassion. They’ve had a life.

It’s impossible to think that I’m as far from 11 as I am from 71, but no matter how I crunch the numbers it always works out that way. Sadness is a small ingredient in this soup. Gratitude is the broth, the part that all the rest swims in. If I had to isolate a feeling I wish for you guys when you reach an age, it’s gratitude. It’s truly the key to unlock true acceptance, love and happiness. Because this gift you are given is not to be trifled with. I’ve seen people who didn’t get it, who stewed in hate, anger, resentment and ugliness and it’s not worth it. It’s scary to be truly vulnerable but it’s also necessary if you are going to ever be able to feel what all of this can be.

I started writing when I was not much older than 11. Back then it was the muse that would get to me. It might be months on end of filling notebooks or it might be years of living and reading and thinking and learning, not once putting pen to paper. Putting the pen to the paper was great. Not in quality of the work, but in the quality of the time spent producing that work. When there’s so much to say, things you’ve only just figured how to articulate, so many things that you don’t know how to keep all the plates spinning and fear you won’t be able to get out this new piece of knowledge, this new way of understanding how the world is all connected, but it organizes itself, you let go of trying to hold on and you find yourself simply flowing. It’s remarkable. It’s playing pool on beers three and four, the angles appear to you effortlessly and you execute their plan intuitively and confidently. It’s a jump shot going down for days, the hoop starts to look bigger, like it’s looking at you and you know you can’t miss. It’s finding a task that excites you and becoming so enmeshed in it that you lose awareness of yourself and function fully  engaged. It’s a way of refreshing yourself to be so fully immersed. It feeds you and gets you back to full. It’s a glorious feeling that has occurred to me at the keyboard and with my open notebook. I hope you both find something that replicates that feeling. It’s so gratifying.

I shared it with a handful of people from time to time. It was hardly their fault that they didn’t fully understand the task they’d been assigned. They were to merely report that it was brilliant. Transcendent. Perhaps they could have questioned what it was I was doing wasting time working when I was sitting on a goldmine with this massive and massively beautiful talent. Instead they said hurtful and mean things like, ‘It’s really very good. I really like it.’ I eventually would recover and write about how cold the world can be to an artist. 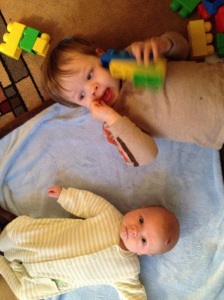 Then you two came along. Turns out you guys were just the kick in the ass I needed to start living the life I talked about wanting. I started with a terrible first attempt at blogging while mom was pregnant with Charlie. Writing has always been my way of logging memories. Not just of events, but also of experiences. Of feelings and thoughts. And even in the excitement before I met you, at the mere thought of meeting you someday, I had to start building my collection of memories up. But I couldn’t do it. I’m embarrassed actually by the things that were there. I’m not kidding when I say this, I was literally the only person to have ever seen this blog. Even your mom, who was kind and supportive only heard what I read to her.

That fear of being fully exposed, the fear of being vulnerable in front of people, it owned me. Not just in what I had written but in life. My life was in service to never feeling vulnerable and exposed. Ultimately it’s a goal you can accomplish and many men do, but it’s a goal you’ll regret achieving. It’s fools gold. As men you need to know, feelings are often hard for us to understand and to recognize, but when you do notice something don’t succumb to the foolishness of thinking you can outrun yourself. You can’t. That game is rigged. You can’t avoid feeling vulnerable or exposed. If you do you might make it through protected, but you will have lost the only opportunity you have to live a great life.

Sure, I am a proud father and I would not at all be surprised if you accomplish a great many things in life that would make your resume a thing to be envied. But I can tell you right now at 2 and 4 you each have the chance to have a great life. A beautiful life. But if you hide from life, avoid pain and discomfort, try to keep who and what you are covered up, you’ll get to the end and realize you wasted the whole damned thing. I’m so thankful to you both for being the unwitting teachers who clued me in to this.

Before that it was your mom who crumbled the walls. She helped me understand that I had to stop hiding from life. Which I did actively through passivity until she helped me engage and be vulnerable in front of just one person. Her. In doing so I saw what I’d been missing.

Writing here has taken many turns I didn’t see coming when I started. I’ve had some successes and it’s been great. I hope there are more. But in the end, this, the developing dad blog is about you guys. Even the parts that are so clearly about me and my journey. Some day I’m not going to be here and you’re going to be left with an understanding that you didn’t know as much about me as you wished you did and it’s my hope that this can be a small supplement to your record of me, mom and our family. Not just when I’m passed, but before that as well.

I want you to have all of this, all of me for as long as you want it. I want to be there in the only way I can be at the times you’ll wish I was there but know I can’t be.

I love you with all of my heart, Teddy.

I love you with all of my heart , Charlie.