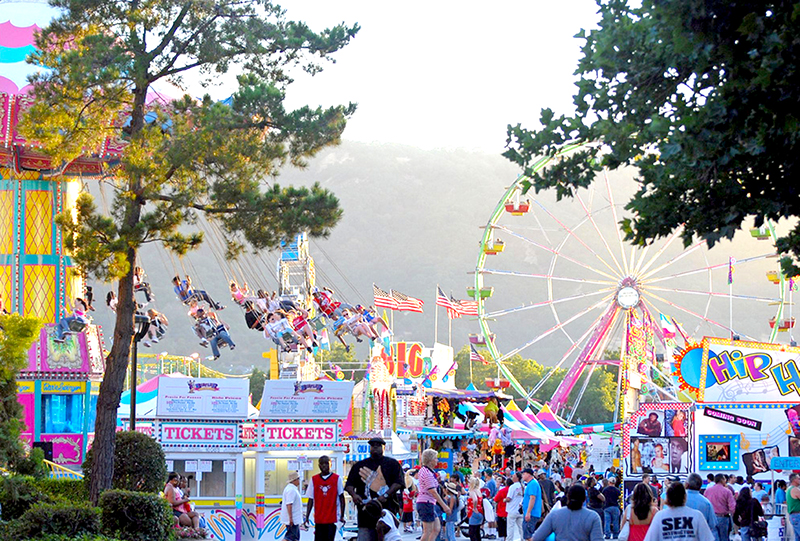 Saturday we found ourselves, all of us, lost amidst the deep weeds of toddlerhood.

We were leaving the county fair. It was hot, crowded, noisy and uncomfortable. This was the setting as I did my own performance piece re-enacting every episode of cops ever. The big one was melting while the little one was overdone and riding his big brother’s coat tails. All the mistakes that can be made were. We were unprepared for the crowds, the food, the animals and the heat. Naps were skipped and bad behavior was mollified with treats. In hindsight any parent of any ability could have predicted the outcome. We could have predicted it. But we chose instead to barrel through because that is what you do with toddlers. If you waited for optimal conditions you’d be frozen in place, TV blaring, hiding from your kids. Forever.

Instead we took them to the fair where hell found us. It’s not the fault of the fair. Its not the fault of the heat and it’s not the fault of the various vendors and tricksters hanging their sweet booty, in the form of plush Spiderman dolls or blow up Spongebob’s to attract the hearts and minds of the worlds most brutal and successful class of negotiators, toddlers. Actually it’s totally the vendors fault. And of course the toddler’s fault. Everything is their fault. It isn’t their responsibility to do anything other then what they do, but lets not kid ourselves, we’re all grown ups here, it’s ALWAYS the toddlers fault. That’s okay, they can hardly be blamed for it.

Back to our story…

As I sit on the vacuum packed, stifling, Twinkie-shaped, sardine can of a school bus with with all manner of humanity, waiting on the edge of my seat to see if one of us will crack, scream and dive out the window as the bus tries to weave it’s way through the throngs of fair goers oblivious to those of us on the bus and our plight, toward the traffic that it will have to navigate before getting us to our abandoned vehicles in a vast empty field 3 miles away, I felt relief that at least we were nearly done with this trial. I believe that life tests you and it looked like we were going to make it out of this one having passed this test and learned a lesson.

The bus eventually picked up speed as we traveled away from the fairgrounds. A breeze moved the still hot air and we all let our shoulders down a bit. Even the enjoyable parts of such a day, for parents, are challenging. An example? The Butterfly’s. Going into the netted area, filled with flowers and butterfly’s was something like magic. Until you try to control a 4 year old and a 2 year old that don’t really get it. We were given small, foam style paint brushes upon entering and were told they were dipped in nectar to attract the butterflies, which the 4 year old could eventually do. I turned for a second to look and marvel at how he had managed to procure a butterfly for his very own enjoyment. Being four and having the attention span of a gnat and needing the validation of constant achievement at video-game speed he was bored nearly immediately, which was fine, I still had to look after the 2 year old. Where the hell did he go! Ah. There he.. wait. Teddy, no! He had started brandishing his brush like a weapon and was trying to in fact ‘squish’ the butterflies. Thankfully he is not as coordinated as he thinks he is and no butterflies were harmed in the making of this disaster. In the future, even later that day, this was the memory we isolated and highlighted as the ‘magic’ part of our trip to the fair.

As I slowly drove the air conditioned car I had a few moments of serenity on my way back to the fairground to pick up my wife and kids. A thought snick into my mind. I could probably get away with sneaking off for a bit. Have a beer, catch an inning or two of the Mets game. Why not. What would they care if they got to stay at the fair for a few more minutes? Kids love fairs!

Having arranged with Karen to have the boys across the street from the gate through which we entered the fair I knew it was not to be. They were waiting and I had what they needed. A car, some screens (I don’t care what you think about this, keep it to yourself, talk behind my back, just don’t think I care about your data and research) and a ride back to the grandparents house.

I’m afraid that my abilities as a writer will fail me as I try to describe what it was I returned to. The fairgrounds are in a rural area and the lawns of the residents of the modest homes in surrounding the grounds are  filled to bursting with cars that paid a bit extra for the convenience. These folks who paid $10 to be able to leave immediately, when free parking was right down the street, people I called suckers not 3 hours ago, are the smartest people. Ever. As we crowded our car onto the edge of one such lawn, across from the parked police car, lights aglow for apparently no reason other then to be prepared, my family came into sight. The full blast of a Volvo AC unit with the windows up can completely cancel out the sounds of what was perhaps the busiest moment of the busiest day of the county fair, megaphones ablaze, kids screaming from death defying rides and all manner of annoying, ice cream truck style circus music blasting from the concourse that is perhaps as much as 25 feet to my left. What it can’t obscure is the wailing and screaming of my four year old son, retreating to the maze of automobiles behind him, blood curdling screams that would cause me, you and any other decent person to stop and watch to be sure that he is not in mortal danger.

He is not, but it’s not so evident. You see, I’m angry now. Again, it’s unfair, not his responsibility and still entirely his fault that I’m now on a warpath. He’s a big four year old and his brother is squirmy. Being outnumbered and overburdened by the necessary and unnecessary items that accompany a mom of toddlers from a fair, my wife was not able to fully gather him in his state and it was a full blown disaster unfolding. I kid you not, everyone stopped, as if this were a real episode of cops, and watched as I stormed, cheeks ablaze in frustration and fed-uppedness as I marched directly at the boy and restrained him physically. This was a situation in which diplomatic methods could not be employed, not yet at least. We were in the midst of a full blown rebellion. What was needed was a police state, removal by force and I was the brute squad.

Here I was, a stranger in a strange land, looking to all the world like the type of father I was, but not the type I reported to be. I prefer to be the benevolent dictator, allowing my boys to think they have choices. ‘do you want to brush first or read a story first?’ that kind of thing. But when the moment is upon us, when hell is staring me down at the county fair all artifice is lost. This is a regime that must occasionally use the full force of it’s bestowed powers and put down all threats. Today that threat came from within and I’m terrified to think what the surrounding masses thought of our little performance. Surely they saw my anger, his frustration, our failures and must have come to the same conclusions I’ve often come to when seeing others in this or other, similar situations.

Within five minutes, a seemingly short time until you’ve spent it confined in a station wagon with two screaming, not shouting, SCREAMING toddlers, we were able to diffuse the situation using the wisdom of our elders who always have spoils ready for their grandkids visits.

‘Okay, Charlie. I guess I should call Grandma and tell her to put away the cupcakes and ice cream. Cancel the pancake dinner. Charlie doesn’t want it.’ I said in my best toddler-whistle falsetto.

‘Okay, I’ll tell Grandma, as long as your a good boy and say you’re sorry to mommy.’ Still falsetto.

‘I’m sorry, mommy. Yeah!’ he shouted, and got the attention of the other.

‘Cupcakes!’ They yelled in unison.

6 thoughts on “Hell Found Me at the County Fair”