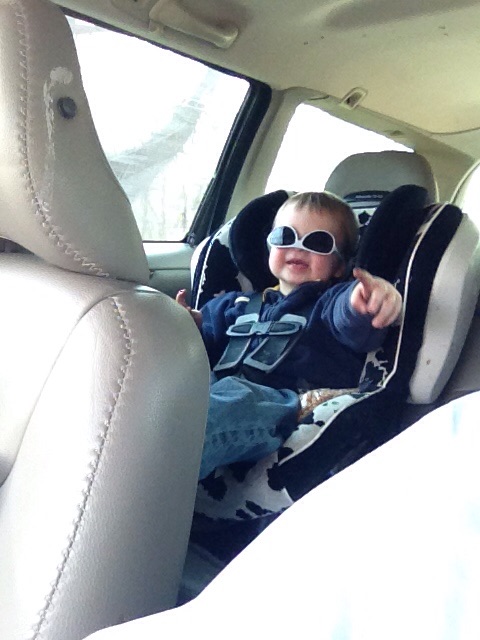 I woke from my nightmare shrieking, terrified. I was harnessed, strapped to the most unsuitably uncomfortable plastic monstrosity one can imagine. It was suffocatingly hot. Had I not wiped the tears from my eyes and been able to properly assess my situation I’d have bet any man a fair few shekels that I was a son of the south and this was the steam that one only finds in the deepest of Faulkner’s novels. But the world that whipped past my view through the windows of my carriage were clearly the cold grey of the north. This suits my druthers for political and humanitarian reasons but I’d be fairly called a liar if I didn’t concede that even then, even dripping from inside a puffy coat that could serve a Sherpa with more than enough warmth to assist a white man to the top of the highest mountain, that I am without question more suited to gentler climes than those that greet me on this day.

I had only been screaming for seconds, perhaps as much as a minute, in pain and discomfort before my captor, the barbarian, my father, reached back and gave me a drink to cool down and restore some small amount of what I’d sweated away in my stupor. I must let the old man off the hook for some of this. I’m merely a child of 3 years at this stage and I’m incapable of recalling a time when I wasn’t thrown into a soothing and restful state once a drive has begun in earnest. I enjoy this view of the world moving so steadily past me at such high speeds and the hum from the motor in my ears and on my body have a positively narcotic effect on me that I’m hard pressed to resist. I rarely do. I was not drugged or harmed in any real way beyond the sores that have occasioned my body after my full weight has pressed my delicate skin against the hard plastic that is barely disguised by what my captors seem to think is a quite playful, bovine pattern on long ago matted, formerly  plush fabric. In the end these are not a good reason for concern as I’m 3 and have miraculous capacity to recover and heal. Sincerely. Any bruising resulting from my journey’s in this chair will disappear by nightfall once I’m at my destination and allowed to remove myself from this seat. Seriously. I’m to understand this won’t last forever, but one could literally watch me heal in a sitting if they were so inclined.

The barbarian removed all such things that might bring me joy and placed them on the floor beneath me to taunt me. So I have chosen to get his attention the only way I am still able to. I have fashioned my drinking cup into a weapon. A projectile to be exact. I shall only be able to use it once so I’m hopeful it will be understood that I had no choice. My rambunctious rebellions are his fault. He had left me no alternative.

I daresay I shall use the technique again considering how very effective it was in getting his attention.

Once done I asked, nee insisted he retrieve my books and assorted nick-knacks and colorful do-dads from the floor beneath me. If he wished not to do these things he shouldn’t have put them just beyond my reach and restricted my free movement so thoughtlessly. I guess from the color of his face and the boisterousness of his exclamations while completing the task of gathering my things that he won’t be so thoughtless in the future.

Now placated and able to wiggle I am relieved and able to find some comfort by shifting my weight in order to start brand new sores on some other part of my body. As a captive I’m being treated fairly. I’ll never tell the savage and give him the satisfaction, but I know that he has won this battle. I fight on through diffidence and surprise attack whenever I see the opening. For example, I ask for things, everything in my sight. One at a time. He fetches them for me. He is smart and long ago ceded this territory for hope that his seeming benevolence will placate me. To keep this dynamic I am on a strict policy of being satisfied with something given me every third time. The other two times he gives me what I ask for I scream and cry and kick and generally behave as if he has done me some unspeakable harm. Truly inconsolable. This is to last no less than two minutes. I know. It’s nothing, but I’ve come to find me screaming for  for as little as two minutes appears to be a form of torture to him.

Finally I turn and once again become lost in the world of the free that flies past my window, close enough to touch but far enough to stay just beyond my reach. This seat becoming my own Folsom. I contemplate my cruel fate and begin my ablutions when out of nowhere the heathen speaks.

‘Get your finger out of your nose.’

The gall! He knows what forced air heating does to my sinuses and knows that in my current state of imprisonment I have no ability to retrieve my neti pot and address the issue in a civilized fashion.

Besides, he’s a habitual nose-miner himself. What? Does he think I won’t notice. I think I even saw him eat one once.

Farewell fellow travelers and if you see me and I am liberated, please have pity on my jailers. They mean well.

7 thoughts on “Missives From My Captivity: Notes From The Toddler In The Back Seat”