When your seven year old son manages to have his attention wrangled by a book you pounce. When he falls so in love with a book series that he reads 12 of them as fast as he can acquire them you do everything you can to feed his passions. In our case that meant spending hours on end reading with him. He would assign both me and his mother separate books that we would take to his room and lie in his bed with him while each reading quietly. If one or the other of us chuckled we would read what it was that made us giggle back so we could all get in on the laugh. For us, for our Charlie, that book series was the Diary of a Wimpy Kid books by Jeff Kinney.

I don’t know if you’ve had any time recently with an obsessed seven year old. It’s intense. And when there is a exactly 217 pages x 12 books of details to obsess on ones curiosity extends beyond the pages of the books and into all the surrounding content they can find. It was while pursuing any and all things Greg Hefley that our Charlie discovered the existence of An Unlikely Story in Plainville, Massachusetts.

Well, our fate was sealed. A journey to the store was in the offing. So when we surprised him on the night before we were to drive the four and a half hours (spread over six or so as we were of course traveling with the seven year old and his five year old brother) he immediately started bouncing. Just ceaseless bouncing while exclaiming over and over, ‘this is going to be the best day ever!’ 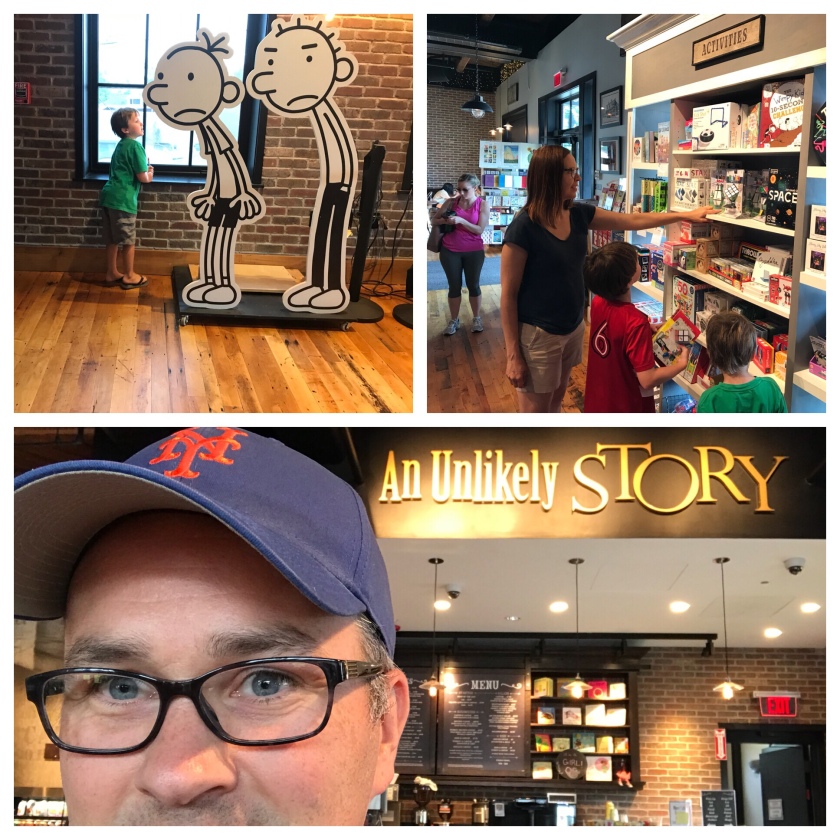 There’s no telling if a bookstore so highly anticipated in the active imagination of a little boy can live up to his wild expectation. As soon as we pulled into the small parking lot adjacent the store on the otherwise unremarkable intersection in the aptly named (no offense) Plainville any concerns were allayed. He was all buzz and electricity.

Upon entering the bookstore we were all a bit overwhelmed. Immediately it was clear that this store was not the beautiful monstrosities we come across at our local corporate book monolith but rather a space designed by and for people who loved books. The high ceilings and burnished wood surfaces were beautiful in the lighting that instead of bathing every inch in overwhelmingly bright floods of fluorescent uniformity highlighted the spaces between the shelves and the items throughout the store.

It’s clear as well that this space was designed as a community space for book lovers, fantasy geeks, story obsessives and lovers of the type of independent bookstores that take residence more in our minds and memories than in our lives these days. Which is wonderful. For all the awesomeness we discover at the massive book behemoths there is something about getting lost in a less uniform space that I didn’t realize they were missing until they got to navigate this place of magic. It’s a modern throwback to a time when bookstores held a different role in the life of a place and a welcome balance to the modern, uniform experience. A place where a sports fan, a cookbook enthusiast, a reader of mystery and genre fiction and kids learning to fall in love with stories can share the space without feeling separated and segregated. Where each can stumble on the other and become curious about others interests.

The cafe was unobtrusive and inviting and after making all our purchases of all things Wimpy (and a novel for me and bag for mama) we were comfortable lingering and exploring our new lit stuff. In fact the cafe attendant saw how much Charlie loved the Wimpy Kid books and when we were done getting our assorted refreshments she slipped us a few cups, the sort used for a fountain soda or iced coffee, with images of Greg Hefley, the Wimpy one himself, all over them. We haven’t broken them out yet. We’ll probably save them for dinner the night his pre-ordered, signed copies of book 13 come in the mail! 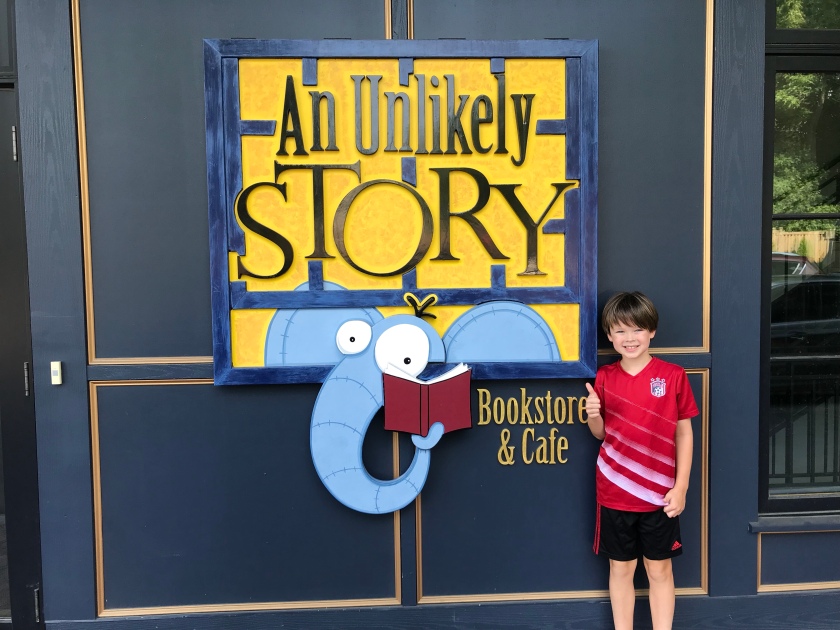 These book shots and paperback selfies, they are amazingly touching. I can’t begin to describe to you how much they all mean to me. In a very real sense they are a literal dream come true. They are kindness and generosity and love I can feel. I’m moved beyond words and grateful to no end.
I never feel like thank you is enough. I start vomiting exclamation points. I start thanking so earnestly it might sound insincere, it might even read that way to me, but it couldn’t be more honest. I’m so very thankful.
If you are on my friend list it may seem silly that 10 or 12 people are doing this, it may start to seem silly, laughable or even annoying. I don’t care. I will love these pictures every day for the rest of my life. They are the product of so many kind and charitable souls celebrating a friend who is trying. To my eyes these pictures will ALWAYS be beautiful.
Thank you.

From the start this blog has been an art project for my kids. It was meant to be a place where I could document the process, from the start. I wanted a place where they could visit where they were before the memories were there own. A place to shade and fill in the memories they cling to years from now, when we are old and the world is there’s. To this day that remains the thrust of my writing.

As you can see the sprig of that initial idea, to make an art project for them of our early family is at the root, but like any organic thing fed and loved, that idea grew and continues to grow. One way it grew was that it turned out that there was an audience for this kind of art. This project with a specific audience seemed to be relatable to many others feeling and experiencing the transformative nature of parenthood in a way that made others seek out some of my sotories. Some were funny and some tender. It was a huge day when outlets like Scary Mommy would accept these writings and publish them. I’m thrilled to have worked with amazing editors at sites like Mamalode, Good Men Project and Sammiches & Psych Meds, amongst others.

It’s been and remains a journey that I’ve enjoyed. It was only natural when I came to a point where I decided I wanted to collect the best of my writing, the most personal, the funniest, the most well written and turn it into a book. It was exciting to work on these pieces and in the process I started to see a forest amidst examining the trees. This process of growing into the dad I am now has been extraordinary and I’m so happy I have this place where not only they will be able to come to learn about us but Karen and I will be able to visit years from now when we want to visit this most vital and amazing time in our lives, when we are rich in memories and have time to collect ourselves and make sense of lives well spent I’m heartened to know this place will be here for us.

If you would like to purchase a kindle ebook or a paperback copy of your own with these stories you can find them here.