I have a 30 year relationship with drinking. One that covers so many memories….

I’m thrilled to be on The Good Men Project today, writing about it all…. 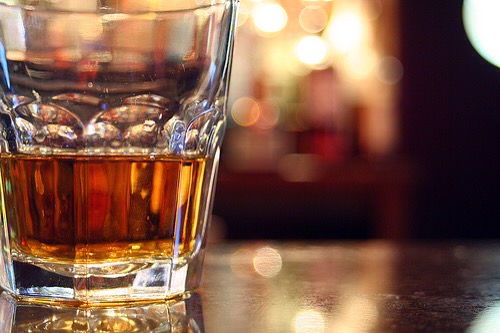 I love the first beautiful sip. The factory whistle of my soul telling me my obligations are done for today and it’s time to play. I love the giddy inebriation of that first drink going down in minutes followed ever so joyously and abundantly by a line of soldiers willing to die just for me. I love the feeling when I know I’m a little light headed and I don’t want it to ever go away. I love it so much. So much.

I’ve been drinking for 30 years now and I know that it’s not ‘right’ to say it, but I’ve loved a lot of it. I’ve loved it so much that I can even miss and love the awful parts of it.

I don’t really drink anymore. I drink, don’t get me wrong. I just don’t ‘really’ drink anymore. Two’s my cap now. Has to be. There’s too much I have to do and the body doesn’t absorb my indulgence the way it once did. My recovery time took a serious dive around the turn of the century and has bottomed out by now. If I ever lost my head and went at it with the hedonistic gusto I did in my teens and twenties, or the rigorous grinding it out style I adopted as a wily veteran in my thirties, lord knows how long I’d be laid up. At least a week and I’d be gun shy for at least 3-5 days. I know the math doesn’t really work out on that one but I’d offer that you’re looking at it wrong.

I marked who I was as much by what I was drinking. As who I was drinking with. I used to be a committed beer guy but the cells morph and your tastes and cravings change. I still always have beer in the house, but a six pack, a starter pack for me in the days I was really drinking, now lingers for a minimum of a week and that’s with another grown up in the house having one or two of them. No, the glory days have passed.

I still know what I like and I indulge it once or twice a year. I like whiskey now. Started with scotch, but now it’s any. I’ll get a bottle for my birthday and one for Christmas perhaps, or in celebration of something momentous; a new job, some new, big writing goal achieved or maybe I just feel like it. Happens two or three times a year and I wait until the house is quiet and I’m the only one awake. I get the lighting to my liking and I sink into my spot and I drink. I still have the propensity after decades of chugging beer to drink it too fast, which is always alright by me. My wife knows I still got whiskey left if I’m snoring. Whiskey puts me to bed like a baby. Like a giant, blissful, soulful baby.

I miss meeting my best friend at the park across the street from my house over stolen beers.

‘Give him a beer.’ Said friend.

He was a freshman and I was still in 8th grade, but we made it work. Made it work for a lifetime. That said it’s been well over a year, maybe two since we’ve been in touch. That’s me. It’s not him. He has always been the better friend. Not to mention better at making and way better at maintaining friends. He’ll be my best friend, outside of my marriage, for the rest of my life. I have no doubt. I miss him and I hope to see him again. I mean I know I will, I just don’t have any idea when.

I miss the drunken sneaking of teenagers in middle America. Honestly, in memories it was a movie. Boys in cars drinking on the sides of country roads surrounded by corn fields in the light of the moon, smiling and laughing and having the strangest and most unexpected conversations. Myself and Kenny telling a random stranger about our imaginary exploits on very real athletic fields we’d only ever see on TV. Fights and laughs and girls and boys, drinking our GL’s and as free as we’d ever be.

I miss Driving around in beaters visiting responsibilities we couldn’t yet live up to and talking openly about how we couldn’t sustain or maintain friendships when one had everything and one couldn’t come along for that ride. I remember my friend E. Telling me I was gonna be a writer someday. We talked like that, over 40’s of OE, sitting in parking lots and learning to be men. I had read a couple books and I wanted to write one. But he was the only guy I’d really talk about it with. At some point the Newport smoke would fill the cap of the beat up old 70’s mustang with rusted out floors replaced by plywood and we would talk for hours. We had different histories and the future was threatening to end these nights. This wouldn’t be the last but he told me, he said I’d be a writer. Just knew I would be. Told me to write about this, about us. I miss that.

I miss the drunken nights of college life, when the world became bigger and smaller all at once. I didn’t love it there, not at all. But I sure had a hell of a lot of laughs. I was starting to feel the difference between how I felt and how I looked and how the latter dictated how people viewed me. I was ocassionally angry drunk. It was a thing that I’d seen with my high school friends, but I didn’t really get it. But I got it in college. It mostly turned to depressive drunk, but there’s no better place for that transition. Always surrounded by friends and everyone always ready for that novel suggestion of grabbing beers when it would be proposed every evening after dinner. It’s a fun and friendly place to disappear and I did. So many of the people I met there I couldn’t really be vulnerable in front of. I wasn’t ready yet to show myself, but they weren’t either for the most part, so that was fine.

I miss drunken benders with the cast and crew of my personal attempt to save the world. I miss the stories we told and heard at Cheer’s in Tannersville, the counselor’s bar where we’d go to blow off the steam that had resulted from our boiling, youthful exuberance. Fed by hormones and that energy we knew would never leave us. We’d work 18 hour days filled with emotional turmoil, endless toil, broken backs and tireless love and want nothing more than to go to town and relive the day we’d just finished all night. Or until the last van before curfew could get us back up the mountain in time to sleep it off before starting it all over the next day.

I miss the dark and lonely weeks I spent in the camp I loved, slowly losing light as the summer turned to winter and the drinking turned therapeutic. Sitting in my quiet cabin, in the abandoned camp watching the same VHS tapes over and over with a can of lemonade and a bottle of whatever was cheapest. Finishing both of an evening, wrapping myself in the warmth of the sadness that accompanied me retreating to the woods. I miss the silence and even the sadness. They were the only weight that cloud properly counter the ebullience of those summers.

I miss moving to New York City and drinking with a million others every night, every free moment. I miss making a life with roommates. Finding ways to laugh and laughing at ourselves and realizing how foolish we’d been to think so highly of the adults we’d known. Finding out the world had changed and having drinks to honor the dead and to loosen up our minds and lubricate our thoughts to try to make sense of the senseless happening on a scale that had only ever existed in the faraway other. I miss my friend and roommate deciding that we needed to set up the table, order falafel and gyro’s and grape leaves and drink wine and talk because there was nothing else to do but talk about the world and how it was changed. Forever.

I miss the lonely life on the treadmill, working all day, going to the gym sweating out the previous nights drunken overindulgence as a form of penance only to get it all out and know I’d earned my evenings drinks. I miss getting the cycle interrupted when a few texts would come in a a bunch of folks would be at St. Mark’s tonight. You coming. Let me check. Yes. I’ll be there. And I’ll get sloppy drunk and everyone will laugh and I’ll miss it all as I leave early to get home for a quiet, solo nightcap or two.

I miss falling in love over drinks and finding that love at the street end of the bar downing two too fast to be sure to have the courage to pull off what we did that night as the bubbles flowed in and through us. I miss asking if you’ll have another even though it’s a Sunday and we both should go to work tomorrow. I’ll miss us both saying yes as long as we could stay right there as long as it took to know there’d be another date. As long as it took to know you’d know I was the one as I knew you were already.

I miss being Saturday wanderers stopping on the Island for a winery tour completely unaware where the day would takes us. Finding ourselves lost on the island in a living room/tasting room and watching you bubble with glee at the place we’d found. I miss the nights when you would go to bed like a responsible adult and I would drink a bottle of Absolut. I miss them because they were fun, mostly. And because you knew and you let me work out whatever it was I was working out. When you saw it was nothing you knew I was in too deep and you lovingly and sincerely asked me to please consider slowing down. I did. I miss that more than anything. It was the most loving thing anyone had ever asked. I’d tried to get people to believe me before that it was getting to be a bit too much, but you believed me.

I love drinking. I love being drunk. I love it now more than I ever have. I don’t do it anymore. I don’t get drunk. Because I found something better. But I will never forget the life I’ve had, the life I’ve lead, drinking and laughing and loving it all.