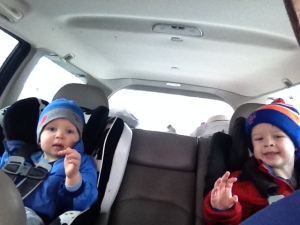 Driving with my kids is a joy that I’ll always relish. I wrote a piece once about the road trip to my future that I took with my dad decades ago. He responded to it. In his response he gave me one of those direct instructions that he’s parsed out over the years that are offered so sparingly that you know immediately he’s giving me instructions. Were he a more crass person it might be accompanied by something along the lines of, ‘Hey, don’t be a dope…’. Not being a crass person, he just stated directly, ‘Always say yes if your kids need to be driven somewhere far away. Its the best conversations you’ll ever have with them.’ Its great advice, I can tell already.

Driving the kids to ‘school’ each day at this age when they are coming to as people, where every discovery is a process and there are a thousand discoveries exploding like fireworks in their constantly curious minds, is a privilege. These trips are filled with questions and laughter and tears and fights and I Love You’s and play that song loud’s and the rest. It occasionally is even accompanied by long stretches of silence, believe it or not. We have a long, nearly unbroken off the beaten path two lane road that takes us through a beautiful ‘country edge of town’ that allows for smooth passage lending itself to peacefulness. Enough peacefulness at least that they can breath quietly for a few minutes if the mood hits. It’s all quite blissful really. It’s the calm between the hubbub of morning prodding and deal making and the hustle and bustle of the day for both them and for me.

This morning was different. It happens from time to time. But I only had one with me. Today it was because the younger one, Teddy, has been pretty congested this week, and since Mom would be working from home today and also slightly under the weather, he’s home as well. Having moved his car seat to mom’s car it’s always arresting to see the bare (though disgustingly, VISIBLY sticky with all the drippings of a toddler through the whole winter when it’s too terrifyingly cold to clean it up!) seat where a kid, an adorable, cheeky kid, usually sits. Its even a little viscerally disturbing.

Just last week I came home and Karen told me that she had one of those close calls where somebody nearly ran her over with a truck. It’s the kind of thing that happens to anyone that drives at some point. Probably a few times. When it does it has a way of immediately reordering ones priorities and this was evident in her as she retold the tale. It was really scary and she was appropriately shaken up. Nothing to stop her from anything, and nothing to scare her off driving or anything, just palpably aware of life’s fragility. We all have been there, and it passes. It’s always good to feed that respect.

It’s a respect that I didn’t fully have until I had kids. Amongst the surprising reactions to parenthood for me has been the awareness of my mortality. It was amongst the first reactions I had after the love and adoration and uber respect for my wife, right after Charlie was delivered and made me a dad. My healthy respect for and mild fear of death became a different thing and it has remained different ever since. I’m pretty much solely worried about death because I can never ever be okay with leaving these guys. Even if it happens 50 years from now, in my sleep, peaceful and having said my goodbye’s. This dream scenario will still leave a gaping hole in my kids hearts and it’s natural and I can’t stand the thought.

The other fear, the true fear, is the fear that something unnatural could happen. That the proper order could get mixed up and we’re left without one of them, or the thought that Karen or I, or the truly awful thought, Karen AND I could be randomly run over by a truck and that’s it. Done. It’s at the same time too scary to consider and so scary it’s hard to ever fully rid it from your head. I even play out the scenarios. I can’t help it.

Being a dad is not often scary. It’s exhausting, confusing, exhilarating, exasperating, inspiring and even liberating. But occasionally, when a bit of scary slips in, it’s terrifying.

Then your little man asks you to put on the funny song and turn it up loud and the car is filled with the beat boxing skills of Matisyahu as we drive down the road having the time of our lives and it passes.