Today is one of those days that we all stumble forth from our cocoons, musty and rumpled from the inevitable wear that shows on our body and our souls after months held hostage indoors. The same temperatures that in a mere 6 months will require us to go searching for our bulky sweaters and jackets on this day made us desire nothing more than shorts and t-shirts and flip flops or sneakers. The sun on our skin was divine! Even I, a devoted lover of the great indoors with medical reasons to avoid the out of doors when trees are budding and flowering couldn’t resist and did some gardening this morning, an option I have at my job, which is delightful.

It was a day to ride with the windows down, and we did on our way home. We have a commute, Charlie, Teddy and I, of perhaps 25 minutes, but the speed limit never exceeds 40 miles and we are in quiet towns where cops spend a good deal of time being visible in order to encourage compliance and by now most are trained and the windows down today was perfect. The dog walkers, the kids bouncing basketballs on their ways to the courts, the commuters disembarking the trains from Gotham in their short sleeve shirts, light jackets slung over their messenger bags as they strolled at a noticeably slower pace, it was all enough to make one giddy. We even passed a park filled with kids. Filled.

On closer inspection it wasn’t just kids. It was kids and their grownups. Plenty of them. In fact it was largely kids playing with their grownups. Now I could certainly chalk this up to the newness of the spring air, and to be sure this is partly responsible. But while I’d been driving earlier in the day I’d heard a short ad for an upcoming radio program on WNYC, the public radio station out of the city. One of the topics the program was going to discuss was intro’d by a clip from an expert, a social scientist I assume, who mentioned that kids today, outside of enslaved peoples and the abuses that occurred prior to society outlawing child labor, had less freedom than any other time in history. Combine this with headlines I’m seeing of parents that allowed their 10 and 6 year olds to walk home from a community park a quarter mile being arrested and investigated by child protective services and I’m starting to sense a frankly terrifying trend.

Now I have to be realistic here. I’m raising kids in a time when all these things are the norm and I’m more protective of my kids, directly so, then I’d have ever thought. But at this point they are 2 and 4 and it’s 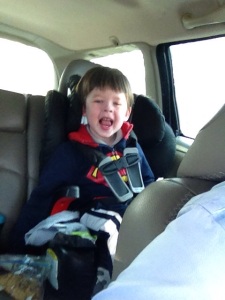 defensible. But arresting a parent that let their 10 year old walk home from the park, that’s just nuts. Again, I read just the headline and the kid could have been the parent’s drug mule for all I know. What I do know was that at the park I was passing parents were playing with their kids to the exclusion of kids playing with kids. It was evident and obvious. Its a problem. Kids have to feel left out by other kids from time to time. They have to learn to be self reliant and they have to do so by trial and error. You don’t learn social skills necessary to navigate life by playing with your mom or dad at the park. Get out of the way parents. I suggest you bring your phone and sit in the car so you aren’t tempted to intervene when your little one is sad for a minute. Let them figure it out. It’s the least you could do. No wonder so many of us talk of how overwhelming it is. We’re not supposed to be responsible for alleviating every negative interaction or feeling. We’re supposed to be the people that help them learn to navigate those things independently and they can’t do that when we hover.

Drop your kids at the park and bring a book.