Writing. I write to express myself. Sometimes it brings a smile of recognition to those that have known me or shared a portion of the same paths I’ve traveled. Other times in sparks interest of a sort that is more intriguing. Revealing of a self I may never have thought to share or may even have been hugely  invested in hiding. For me writing sublimates rage, actualizes vulnerability and exposes fear. It’s lessened the load considerably.

Sometimes I write merely to impress. To give myself and hopefully some others a few laughs. I like the feeling of making people laugh. I like the feeling of people thinking I’m funny even more. I like them telling me I made them laugh and that I’m funny most. I’m as easily wooed by flattery as anyone. Moreso than many, I’m sure. External validations are sweeter than the internal ones. Not as long lasting, but at least theres a button to push. Can’t always find it, but at least I know its there, waiting to be pressed.

It’s amongst my healthiest coping tools, writing. It’s creative and productive and a tool for reflection that has served me well. I fear the times when I’m uninspired and don’t write for a few weeks. I spent twenty years scrawling incoherent ramblings of rage and confusion into manic and crazy looking notebooks and journals wanting desperately to be a ‘writer’ only to learn it took others reading to make me one.

After that I learned that a facility for words merely means you meet the minimum requirements. What became apparent quickly to me was that I had to start getting naked. I had to start writing down the truths of me and not just the flattering ones. I wrote about rage and failings and experiences I buried deep. I shared my scariest moments and my more vulnerable ones. I have not fully cleaned out the closet as yet, but I’ve made space so when I look in I can make some sense of what’s left in there. I can see it all. I don’t just crumble under the sheer mass of emotional detritus. It’s been a very healing and healthy exercise. One I’m proud of.

If you are one of the few that has read a good deal of my work you’re aware of this. To one degree or another you’ve seen the praise seeking showoff, the vulnerable human and the emotional rager. I’ve kind of put it all out there. What’s not so present is the view you might have of me if you were actually looking at me with your own eyes. Every day.

Writing. It’s the best tool I’ve had to cope. With the pressure of being a dad and a husband. The pressure of working in a field where we are caring for people and their loved ones. Having what feels like a lot of responsibility on me a lot of the time due to both those things. Not to mention the inherrent guilt I seem to have been born with. I can’t remember a time when it wasn’t there. It’s the best tool. But it’s not the only tool. Just the best.

The others I won’t get into. I won’t lay them at your feet and wait for some unearned praise, though that needy part desperately wants to. He wants to share all he does from midnight to three, wants to watch the little numbers crawl up. He wants your manipulated respect and even the tender feelings you have and share for a person being truthful about the lesser parts. But they would only validate me and make me more prone to continuing the other things. The ones I won’t share. Not with you or anyone. The parts I don’t want to let go of. That meet me in the middle of the night and stay primary no matter how much I squeeze in to distract me.

Writing is my best tool for coping. I just wish it was enough. 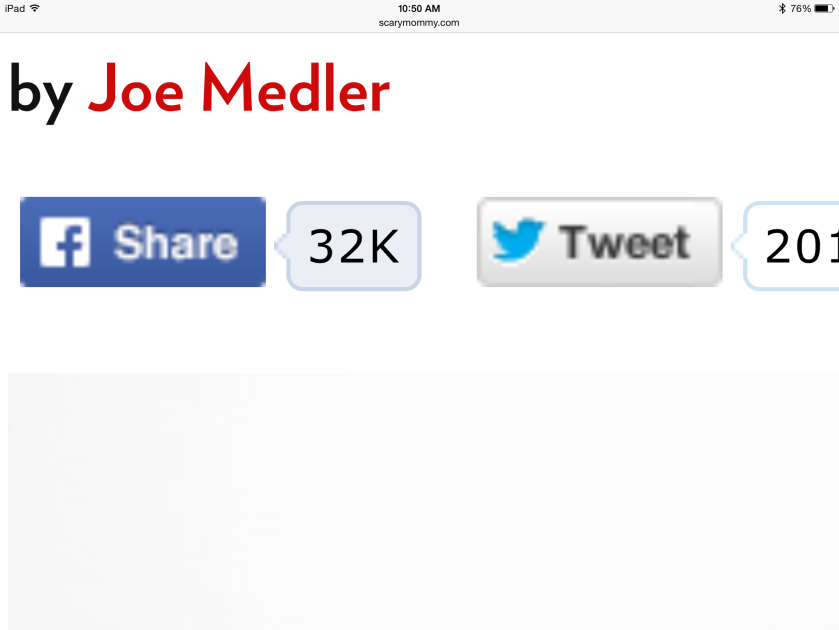 I went viral. In the midst of looking up what would technically make a thing ‘viral’ in the social media sense, I was contacted by a world renowned advocate who mentioned in her message that there were several reasons why my story had gone viral. That was all I needed. She had tens of thousands of followers and was doing truly important work to make the world safer for children, so I wasn’t going to fight with her.

I highly recommend going viral. Granted, coming down is a bear, but having flown so high is a thrill. Its all of five days later now and I can give several reasons why what happened had very little to do with me. I can also tell you I haven’t stopped updating the page to see how many shares it’s received. While I can’t see the actual times the page has been viewed, knowing that it’s been shared 32,000 times since it went up 5 days ago is hugely validating. about 20,000 of those in the first 24 hours. A little over 20K actually. This and $2.00 still can’t buy me a cup of coffee at Starbucks, but its value to my sense of self is unmeasurable.

That said by the third day when the story was shared only a few thousand times, well over 100 per hour, it started to feel bad. I’ve never had a story shared more than 500 times ever. That’s in the entire lifespan of anyother  story. Still, what was happening. The quantifiable love and validation was leaving. All of a sudden I felt foolish.

What the hell was I doing. The story was an incredibly personal one. It was of the scariest day of my life. A day when we thought that our little boy was going to die due to an allergic reaction. It was powerful because it’s hard to not be powerful when sharing the most personal of fearful stories. But somehow I’d gotten caught up in the thrill of having so many people think this story was so valuable that they were sharing it. They were saying mostly very flattering things about me. They were tagging friends it made them think of or who had wanted to better understand what it was like to have a child with a life threatening allergy. They were sharing it with leaders in the world of people advocating for the rights and best interests of this group of people to be protected in a way that exceeded the present woeful status quo. Those leaders actually shared it within their circles of influence. Some even reached out to me personally to thank me for sharing my families story and this was the real value.

I never articulate why I write. To some degree that’s because there is no one answer. On one level I’ve been compelled to write since I was a kid. In a loud and confusing world where I’d found a good role to play, a good disguise, it was a place to be honest, scared, angry and confused. On another level I write to discover. To discover my own thoughts and opinions and feelings. To discover new interests and areas of concern and flaws and strengths. Lately it’s been to share my inner self with the outer world to avoid the pitfalls and regrets that come with hiding one’s light. As an example for my kids. I’d be lying if I didn’t confess that I ocassionally write because I love my kids and anything can happen and I want them to have a first had account of who I was and how I thought and felt in case I pass too early. Or even if I don’t and they are just curious. I want them to have some access to who I am and how much I love them.  Going ‘viral’ and the responses I’ve received have added to my reasons.

I love the writing. I love doing it and I’d love to do it as a means to make a living. That is a definite goal. But as long as I am able to make an impact, be helpful, inform and express myself, I can’t see the lack of it being a source of income ever stopping me from following my curiosity and expressing myself honestly in this way. Viral was fun, if a bit overstated. Hearing that my words helped was and is overwhelmingly gratifying and all the reason I’ll ever need.