The exhibit is nearing completion, though there are still a few pieces left to be completed, logged, inspected and displayed.

The exhibition is of my most productive period and will be in permanent residence in the grand hall. The room, the central hub and featured showroom, has been closed to all visitors for nearly four years. That’s how long it has taken to produce and display the items that are to be featured.

There has been a great deal of buzz generated by myself, the curator and a collaborator on this project, but the room itself has been open only those crucial to the process.

The grand hall in the museum of my life will be hosting the display, ‘Our Family, the Early Years.’ It is a permanent and evolving installation.

I’m forever curating the museum of my life. There is endless detritus that is logged once, noted and recorded for historical purposes and donated or outright given to others or placed in the cold, dark, vast warehouse of forgotten details and mementos. Of those items that I choose to display they are ordered by importance and their prestige is evident in how I choose to display them.

This room, this grandest of rooms, will feed me and fuel me through the times that lie ahead. Through times that will so devastate me that they will make me wonder what all this was for. My aim is to curate an exhibit so stunning, so perfectly designed for my audience of one, for me, that I will be so enamored of it as to be unable to wander too far from it. Over time it will hard wire my memories and the feelings that drove me to embark on such an ambitious, albeit not groundbreaking, body of work.

I will wallow in it, work in it and invest energy in keeping it pristine. All of this in the hopes that even in my feeblest state I’ll always know my way back to that room. That room filled with love and meaning and work and creativity and awe and beauty. Its the room that I intend to live in for as long as I can, until the end if possible.

I will marvel at it’s treasures and inspect those pieces that so transformed and transfixed me. When I can no longer manipulate the artifacts of my specific humanity anymore, I intend to nest in them as I did the first time around in order to feel that pride and love and warmth until I die, smiling at what was and what is.

This document is a map of sorts to a memory or two. An artists description of the work in real time to be used by me as a patron of the museum in the future. It will help me access more fully the pieces that are before me. I’m compelled to do this to make up for all those pieces I didn’t log in this way due to exhaustion and the foolish belief that the memories would be so powerful as to never drift away into the ether. Perhaps I thought them permanent in some way, a way that would make documenting it formally a waste of time. Foolish indeed and I should have known better. But, ours is not to wonder why, and so forth…

It is also for you, reader, truly it is. Knowing that you read, and that you are occasionally moved to engage with me has added immensely to my experience. It is also for my wife and our kids. A log of sorts, though I hope an artful one, capturing this time. A fools errand to be sure, and likely a fruitless and hopelessly failing attempt to capture just a piece of its essence for our collective and individual future enjoyment.

Teddy sits in my lap, every night sometime between 8 and 8:30. Bathed and brushed and comfy in his pajamas. He’s my little bedtime buddy. He’ll cry when I pick him up and momma gives him his Elmo doll. A doll too small to be his lovey, but it is what he has chosen and our many attempts to provide him with a larger, more plush and easier-to-find-in-your-sleep or in the darkness of waking at 2AM doll have been shunned. ‘Mo-mo’, as he calls him, is his guy. The rest are discarded, literally thrown overboard, if he notices them. Two dolls other than mo-mo stay in the bed, a floppy brown bunny and a standard issue bear, but they are so untouched as to be unnoticed.

The routines are a dead giveaway now and he cries and lunges for mommy when it clicks for him that it is bedtime. She is a bit more pliable in terms of keeping to the schedule in general and he thinks if he could just get me to hand him over to her, he’d be able to avoid his fate. Neither momma nor I pay any attention to this complaint anymore as it ceases by the time we get to the stairs, a walk of no more than 12-15 adult steps from anywhere on the first floor of our small and perfect little suburban home, and usually not more than 5 steps from where he’s been picked up, in the living room.

Once to the stairs we make a dramatic flourish of thrusting our hands upward, toward the second floor, a show of bravado that he and I enjoy and one that always brings a smile to his face. Thusly we proceed up the stairs, following our outstretched hands and giggling when we get to the top. The theatricality of it all is just plain silly, but if you haven’t seen him do it it’s just not altogether possible to understand how adorable it is.

He is not going to have these cheeks, these bubbly, adorable cheeks, for much longer, but for the time being anything I can do to make him smile, I will.

Once on the landing we turn left to the bedrooms. Theirs one to the right, but we loaded up all our stuff in it when we moved in and now only reference it if something is in there which needs to be extracted or if we need a place to shove things when people are coming over. It is now, and I imagine will forever be referred to by Karen and I as ‘the cottage’. We christened it when it became the place we flopped down in when we’d pushed enough crap to the sides to lay out a futon mattress and it became the place where sick parents slept, or where we’d lie during that glorious long weekend when we had managed to get them napping at the same time. Our room shared a wall with theirs and we weren’t going to risk even the possibility of being the reason they might wake up.

I plop him down and he runs into his room. Once there he looks around for a second spots the glider chair that was initially used for nursing but is now the rocking chair, and makes a break for it. I pretend to be outraged and shocked, every night, that he’s going to sit in daddy’s chair, and he struggles his way up there, climbing like a pro, sits proudly and takes in my displays of shock, both facial and audible, and laughs proudly.

I don’t know if you have access to a two year old, but if you do, spend AS MUCH TIME AS POSSIBLE watching them walk around in pajamas. It’s just awesomely cute.

I pick him up, turn on various, strategically placed little lights, turn off others, turn on a bit of white noise and proceed to work my way through his stack of books until he decides he’s done, or we finish all of them. To this point, we’ve only added and not yet removed any of his books. Little Blue Truck and Goodnight Gorilla are the musts but usually it’s all of them. I’ve dozed off while reading. I always roust quickly enough, but his weight and warmth on my lap, the dim lights and the repetitive pleasantness of the books have a mildly narcotic effect on me.

Once done I sing to him. Usually starting with Twinkle Twinkle Little Star, then You Are My Sunshine… I may hum from there, I may move to the Beatles. Some Blackbird, some early parts of Hey Jude, maybe some God Only Knows by the Beach Boys. I usually put him down at this time, but yesterday he made me hold him for a bit and kept bringing my hand up to his cheek, so it rested on him, fully holding his face on the outside, while the inside was pressed against my chest while he sat in my lap. If a meaning of life can be said to be a visceral feeling rather than a thought or a defined purpose, this is one of the meanings of my life.

This is one of the routines that evolve early in life that feel like they will last forever, but tend to last a few weeks to a few months before necessity forces them to change or the child simply loses interest and the routine is no longer effective. While I haven’t done a wonderful job of logging them, as I’m doing now, I hope to do more in the near future. Hopefully this is a nostalgic dad’s lament, chapter 1.

I want to go back to the old video’s and photos and jog memories and come back here and record them in detail, as much detail as possible, before they are all gone and I look at the photo’s and see my beautiful boy and remember everything he ever said, but start saying things like, ‘I don’t remember that apartment so much anymore. Was Charlie born yet when we moved in there? Was he only in the apartment for the first year or was it closer to two?’ 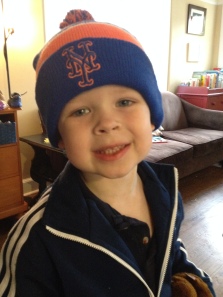 I don’t want that fate. But it or some more addled version of that state, or some less benevolent version of it is surely approaching. Just as new and exciting and enriching phases of my kids lives are heading this way.

So rather I log my memories, in pictures and in words in hopes that those triggers will trigger in me responses that will transport me in an instant back to that dark room, in our still disheveled, not fully occupied or appointed tiny little house where I can giggle with Charlie over the silliness of him pretending to be a dog named Sonny. Where I can pretend his carrots are puppy treats, a move I’ve stolen from his mother, in a multipurpose front room with makeshift changing stations and an unused fireplace and gates blocking every exit. To the place where my little boy won’t let me take my hand from his cheek. Where he will simply find the hand if it goes missing, and place it back on his cheek as he knows that is what’s needed. He’s right, and its one of the chief pleasures of my entire existence, and I will become a silly nostalgist adrift in gauzy memories and I will lose all currency and relevancy willingly if it will help me to remember this beautiful place of messy, sloppy, crazy love where our family began.