I’ve come full circle on sentimentality. It’s not that to some degree I haven’t always had the predisposition, I have, it’s just that it’s become something I embrace, even seek out now that I’ve got some road behind me.

Life is moving as fast as it ever has. Faster in many ways. But for some reason I’m less and less moved by it. I’m underwhelmed by momentous change. I’m not as easily energized by my own morphing and evolutions. I’m simply living it. I’m running full speed to keep up and I’m barely processing it’s going so fast. Who can make sense of this stage with the solid oak I grew from growing ever wiser and the seeds I’ve planted requiring constant tending. Not to mention the intentions I had for myself before the realities I never considered became the droning and pressing necessity of each day as I try to make a life I’ll be proud of.

I’m tired and busy and energetic and overwhelmed at all times. I’m looking at a life that is zooming past and trying to find any and all rest stops and exits that look like I can afford to take them. I’m trying to get as much of this finite life as I am able and it feels impossible to catch up to it.

So I find myself on days like today, Thanksgiving 2017, in a sentimental place where I can experience the benefits of compounding interest as I feel the past in the present. It’s easy to do as Thanksgiving has been a huge part of the magic of life for me.

The early ones were at home and had the tables, all that we could move, fold, setup and tear down, stretching against the grain and crossing transoms to stretch far enough to fit all the family who could be there. I was a kids table holdout who ventured rarely and always regretfully to the grown up table at least once before I was ready. As a result I was always more than happy to give up my seat with the big people to spend another year at the fun table. The food was warm, the air was steamy, small rooms filled with big people and warmed by a kitchen that never stopped. 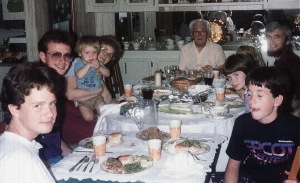 Later, when we were a tad older, but still young it became Florida! We went every year to visit our grandparents in Vero Beach. It was there my dad pointed out the connection that it might not be pure coincidence that Nana and Papa moved to where his beloved (Brooklyn) Dodgers had there spring training facilities. There I saw the shuttle from the driveway and looked up with my dad who marvelled that his dad, staying warm on the enclosed deck had been around when horse drawn carriages and Model T’s were filling the streets and now we were here in his driveway watching the space shuttle. It was there where we snowy natives spent hours learning how to body surf and seeing my dad in shorts, something rarely seen, but always when there was an ocean to swim in. He liked to bob in the waves, floating with his toes popping out of the water, riding the tide in peace. It was there that I saw the dance between my mom and her husbands wonderful, but decidedly commanding mother play out with a remarkable amount of good humor, understanding and grace on all sides. It was there where the adults I’d know later were the kids I remember now. When we see each other I like to think they see that young vibrant me as well. Time has taken its toll and it always wins, but its nice to know their are cousins who’ve seen you all the way through and know you. The real you. And it was their that I learned I may be the funniest in a room now and again and that may be a very useful thing, but I should never forget that theres a family tree of funny that has deep roots and long and surprising branches. I come from funny stock. Thanksgivings with the Wershing/Medler’s were the funniest.

College came and the family tradition couldn’t last forever. We quickly redeployed and had the usual guests and local family holidays that are the norm. Soon I took to heading up to the mountains where some friends had established roots. Saranac Lake and environs. It might have been just three or four times, but those Thanksgivings were amazing. They were like a vast, tribal, artisanal, low culture-high culture blend you can really only achieve in your twenties. Full capacity, zero responsibility, unmatchable sociability and comraderie and a determination to be adult. To this day, no offense to anyone else ever those meals were the most succulent and delicious I’ve ever had. It was a 3 day party and there were late night shenanigans, beer fridges and high times indeed. It was a joy of being alive kind of feeling that I’ll always love.

Then we had the family gathering at my brother’s house in Poughkeepsie. It was like a perfect little blessing that for those years, with me in the city and my sister in the area as well. We would inevitably show up the night before, until there were kids. Mom and dad would show up at night, mom having cooked a meal for twenty and packed it all in the trunk and we would unload into the just gorgeous home he was always so generous with. We would each offer dish and be welcomed to bring it and make it. My mother always liked us to be involved, but it was her production for sure and it was perfect. Food on the piano for serving, table set to Rockwell like perfection and new family as funny as the rest in on the conversations and bringing new humosrs and smiles to our faces. I don’t know what was said, I may have even had a part in the sequence leading to the laughter, but a memory that sticks out for me is my mom removing her glasses and wiping tears, in full all out laughter, only at catch her breath to say, ‘I haven’t laughed this hard since last night.’, only to kick off another round of table wide guffaws. We were all a little grayer at these gatherings, but we still through the football around and stayed up late enough for our turkey sandwiches and movies. Resisting every urge we might feel to get going home if that was in our plans. This was our first real thanksgiving after the kids. The one where we could bring a baby and begin our families traditions in earnest. 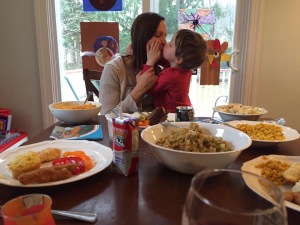 Circumstance changed and kids continued to grow and we began to have our traditional Turkey days at Karen’s parents house. It was such a treat. They live on beautiful land outside Saratoga county. Youhonestly couldn’t paint a more beautiful picture of holiday land. The house was always full of all our favorite treats and every meal was a chance to sit and visit between indoor and outdoor adventures in a landscape carved carefully by nature and man over decades of tending and refining. There were sled rides in snow, treasure hunts, long adventures in the basement workshop and treats to fill the hearts of toddlers and middle aged men. These were magical visits that always started with Grandma and Koba greeting us at the car, as excited to see us as we were to be there. Travel is hard at that early stage, but they always understood and went so far out of their way to make sure the memories were of the wonderous variety.

Now, today, the tradition turned again as we went to a new gathering place in Maplewood. We’ve been passive observers of Karen’s sister and brother in law as they’ve put in countless hours making a warm and welcoming home, a dream home really since moving in years ago. Now once again the tables were laid out against the grain, traveling through the home from back to front, seating and feeding generations of family with more than a delicious meal. It was a magical day. The kids sat at the big table and did mostly great, when they weren’t crawling underneath. Hectic moments when all arrived and too many hands went on instinct to the kitchen, chaos slowly turning to perfection as the food was pulled together by my brother in law, the magician, casual conversations happening everywhere you looked between people who loved being with each other and can so rarely be due to the simple and never ending logistics of life. Good laughs and good food, great stories and long and luxuriant pickingat desserts that fed and fueled the days journey into night. Hugs and goodbyes and smiles and warmth. The tradition is beginning for these guys, the little ones. For me it’s settling into the pace where, seeing it starting again for the kids and watching it evolve once more for all of us grown ups, I can finally catch up to the sentiment. I can feel the nostalgia and the beauty of it all in real time.

It all leaves me so grateful to be sharing this journey with these fellow travelers, every one of them from each iteration.